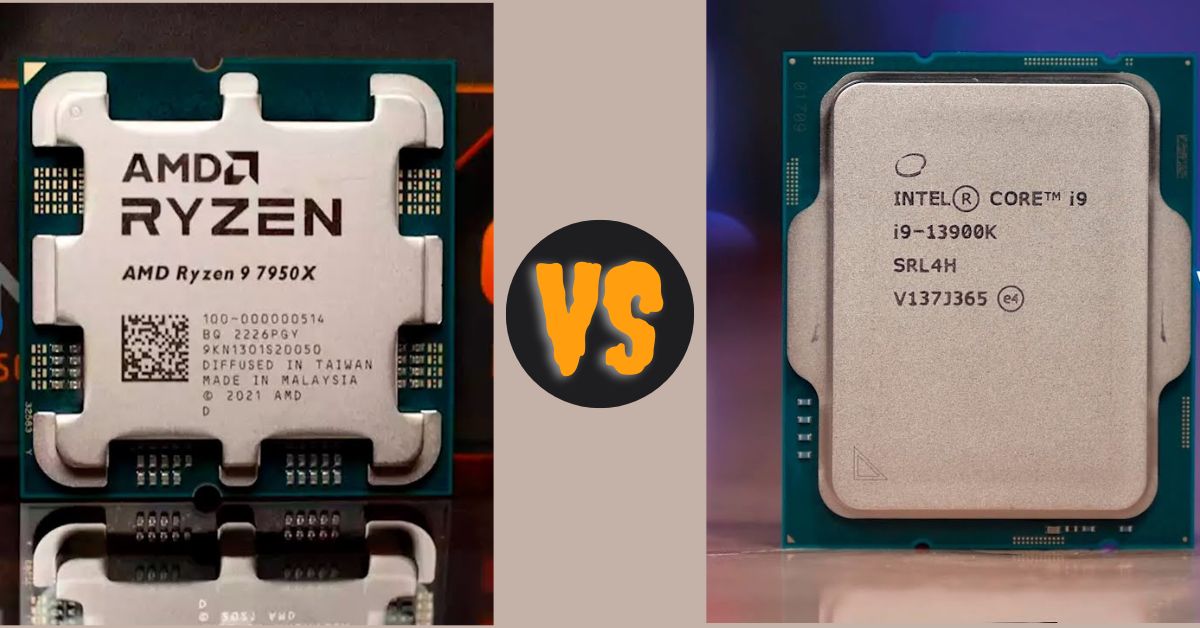 The Core i9-13900K has not yet been released, but our findings from reviewing the Ryzen 9 7950X should give us a good sense of how it compares. The path to possessing the finest processor of this generation is quite competitive. Therefore, it’s advisable to wait for further testing before determining which CPU is perfect for you.

On September 27, 2022, the same day Intel introduced the Core i9-13900K, AMD released the Ryzen 9 7950X. It has a suggested retail price of $700.00, yet slight fluctuations in demand may cause that figure to go up or down in the first few weeks after its introduction. The price of the immensely popular Ryzen 7 5800X3D exploded quickly after its release and has since stabilized at its original retail price.

In spite of this, the Core i9-13900K is still considerably less expensive than the Ryzen 9 7950X. From Intel’s perspective, you can expect to pay no more than $120, which is a savings of at least $100. Weirdly, it’s feasible that Intel could offer the best value heading into this next generation. This, of course, depends on how prices hold up in relation to performance.

The Core i9-13900K appears to be a clear winner when compared against the Ryzen 9 7950X on paper, but there is more to the tale. The Core i9-13900K, like its predecessors, features a mix of performance (P) and efficiency (E) cores. Even though the number of cores is increased by using E-cores, performance is not linearly proportional to the number of cores because of their lower power.

However, as we saw in our analysis of the Core i9-12900KS, they perform admirably when asked to juggle multiple tasks at once. The Core i9-13900K has 24 total cores—eight performance (P) cores and sixteen energy (E) cores. Meanwhile, the Ryzen 9 7950X has 16. While the Intel processor has more cores in total, the E-cores cannot use hyperthreading. That’s 32 threads total for the whole thing.

The cache is the other important spec. Perhaps in response to AMD’s 3D V-Cache technology and its superiority in gaming, Intel has increased the amount of cache available to its processors. Now, both the L2 and L3 caches add up to a whopping 68MB. AMD’s Ryzen 9 7950X comes with 80 MB of cache, giving it a slight edge in this department. When compared to Intel’s Core i9-13900K, whose L2 cache is twice as large, AMD has decided to put more of its cache emphasis on L3.

We can compare specs until we’re blue in the face, but in the end, it’s the design and architecture that will determine how well something performs. The only truly comparable metric is power, and that’s getting closer all the time. To get closer to the 253W ceiling of the Core i9-13900K, AMD increased platform power to 230W.

Based on our testing, the Ryzen 9 7950X offers an 18% improvement in Premiere Pro and a 48% improvement in Photoshop compared to the Ryzen 9 5950X. From this, we can infer that the Core i9-13900K and Ryzen 9 7950X will be neck-and-neck when it comes to content creation, with the latter possibly holding a slight advantage. But it’s important to wait for third-party benchmarks to ensure a fair comparison and verify Intel’s performance claims.

Intel claims that the Core i9-13900K is roughly 25% more powerful than the Ryzen 9 5950X when it comes to gaming. Even though the Ryzen 9 7950X performed better in our tests than the previous generation part, its 13% improvement over the older chip may indicate that Intel’s chip is better suited to gaming. However, more testing is required to see how the processors perform in different games.

In the absence of a release date, it is difficult to predict which of the two processors will prevail or whether or not AMD’s premium of $110 will be justified. Until the release of the Core i9-13900K, the Ryzen 9 7950X was the fastest processor we could test. If Intel’s benchmarks continue to be accurate, it’s hard to see how anyone could make a bad decision.

AMD has taken a radical new direction with the Ryzen 9 7950X. The AM4 socket, which AMD has used since 2016, is no longer supported, and the new AM5 socket is required for use. It’s not just the motherboard that needs replacing; new DDR5 memory is essential. AMD’s Ryzen 7000 processors, unlike Intel’s Core i9-13900K, only work with DDR5 memory.

Although current DDR5 prices are high, AMD anticipates that they will decrease in the near future. Intel continues to follow its strategy from the previous generation, with most motherboards supporting both DDR4 and DDR5 memory. The Core i-13900K is compatible with both DDR4 and DDR5, but you’ll need to buy a motherboard that’s compatible with the memory standard you intend to use.

Because Intel is still using the LGA1700 socket, users who have already assembled a machine with a 12th-generation processor should be able to upgrade to a newer model without having to buy a whole new motherboard. However, before you begin, you should look into the motherboard’s official resources. There is no guarantee that all motherboards will provide this functionality, especially those in the B-series and H-series.

No matter which CPU you choose, most people will need to buy a new motherboard. However, the Ryzen 9 7950X will require more. Depending on your long-term goals, the Core i9-13900K may be cheaper if you use DDR4 memory or repurpose what you already have.

On Raptor Lake, should you wait?

The Ryzen 9 7950X is currently not a highly recommended purchase. It’s the best processor we’ve ever tested, but Intel Says Raptor Lake Will Be Its First CPU to Hit 6GHz and claims to offer comparable gains in performance for about $100 less. Even though the Ryzen 9 7950X will be available for an additional $110, it is probably best to hold off on making a purchase until all the testing results are in and we can see how it performs.