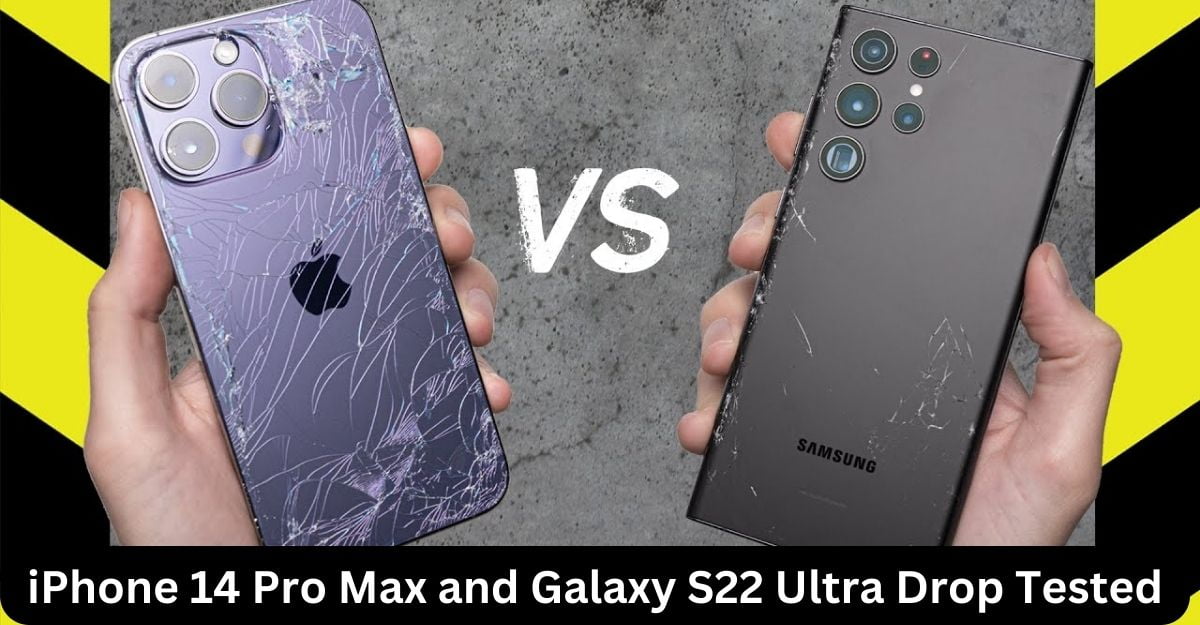 Which premium brand’s drop handles are the best? There is no such thing as a bulletproof smartphone; the iPhone 14 Pro Max is no exception. But how long-lasting is Apple’s latest top-of-the-line smartphone? So, to find out, the YouTube channel PhoneBuff(opens in a new tab) put the iPhone 14 Pro Max and its primary competitor, the Samsung Galaxy S22 Ultra, to the ultimate drop test.

During a drop test, it is likely that both of the devices with dual-glass faceplates will sustain some damage. This is especially true when both gadgets are dropped from about 5 feet in the air onto concrete. In a drop test against the Samsung Galaxy S22 Ultra, it remains to be seen if Apple’s distinctively sturdy materials hold up better than Samsung’s.

The iPhone 14 Pro Max appears to be a better option than the S22 Ultra on paper. Its display is flat, unlike Samsung’s curved edges, and it’s made of stainless steel instead of ‘Armor Aluminum.’ Furthermore, Apple’s proprietary form of Gorilla Glass, the Ceramic Shield, is used on the front of the iPhone 14 Pro Max and is said to be the most intricate glass of any smartphone. Since the iPhone 12, it’s been available and seems to have improved. Neither the front nor the back of the Galaxy S22 Ultra skimps on quality; both are made out of Gorilla Glass Victus Plus.

The iPhone 14 Pro Max did not do well in the first test, which involved a drop onto its back. Apple has been employing dual-ion glass on the back instead of the more durable Ceramic Shield. While the S22 Ultra suffered some damage, it was much less severe than the iPhone’s rear panel. The sapphire glass protecting the back camera was broken in the fall, but the photos still came out well. According to PhoneBuff’s speculation, this is because the camera on the 14 Pro Max sticks out a little further than it did on the 13 Pro Max.

Apple passes the “corner test.” Corner damage was evident on both phones. However, the S22 Ultra appeared to have more severe dents and chips. The back glass of the iPhone suffered further injury from the fall, breaking and detaching at the dropped corner.

Ceramic Shield was finally able to show its worth after the face drop. Broken displays plagued the 14 Pro Max and S22 Ultra. While the iPhone only severely damaged its upper right corner, the Samsung fared significantly worse, suffering widespread screen cracking. At the same time, FaceID kept functioning normally, and the in-screen fingerprint sensor on the S22 Ultra stopped recognizing PhoneBuff’s thumbprint. Nothing here will prevent you from eventually needing a costly screen replacement, but at least your iPhone looks in somewhat better shape for the time being.

The last drop was particularly gruesome because it was made directly upon steel. Both screens have been damaged. However, the S22 Ultra is far worse, with numerous dead pixels and cracks. The 14 Pro Max also has a lot of shots, but they’re all over the place and not just in one corner. The camera’s sapphire glass and the back window were both broken. In particular, the front-facing selfie cam suffered from the severe flare.

Galaxy S22 Ultra vs. iPhone 14 Pro Max: Which Is Tougher?

Despite the apparent superiority of the Ceramic Shield over the Gorilla Glass Victus Plus, PhoneBuff declared a draw. In the larger scheme of things, it won’t mean much. Notably, PhoneBuff also tested a second iPhone 14 Pro Max with a protective cover. The phone was unharmed, and the case showed just very light wear. The moral of the story is that no matter how sturdy your phone is, a point is always a better idea.

To safeguard your phone, you should look at the best cases for the iPhone 14 Pro Max and the Samsung Galaxy S22 Ultras. After all, if you spend more than a thousand dollars on a piece of equipment, you probably want to take good care of it. Both AppleCare Plus and insurance have their limits.