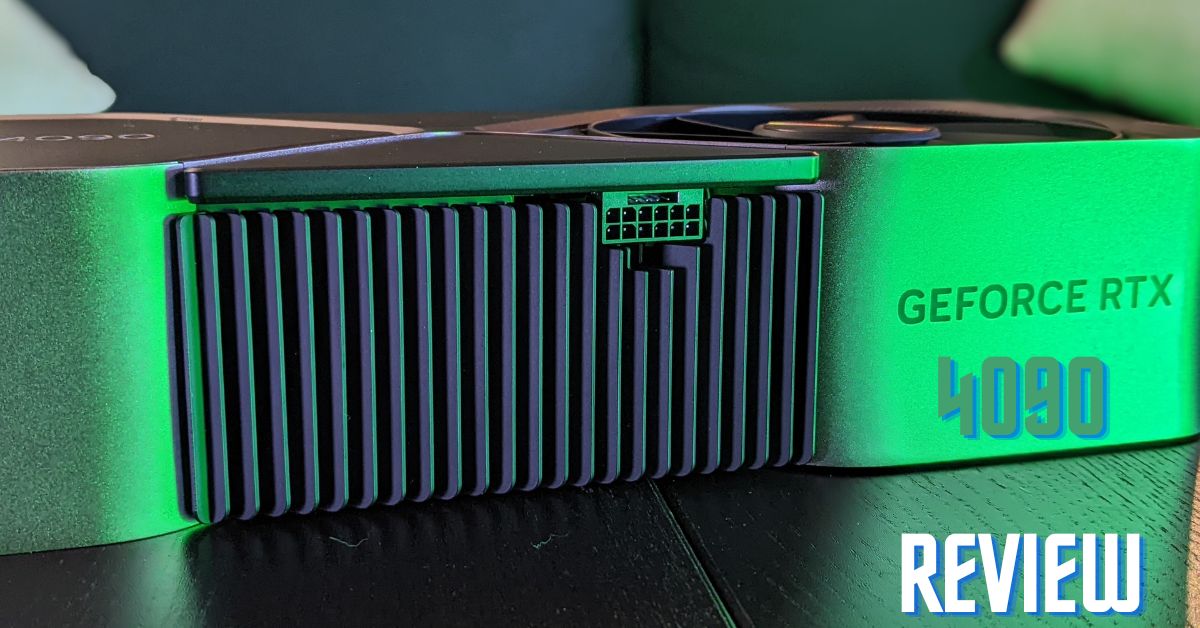 It’s been a while since I could begin a graphics card review without adding the disclaimer that issues with the world’s supply chains, a lack of semiconductors, and the rise of cryptocurrencies rendered the evaluation all but meaningless because the majority of people couldn’t locate or, even if they could afford one.

However, with Nvidia’s latest generation powerhouse, the GeForce RTX 4090, those issues are largely resolved, and gamers can once again enjoy the top-tier performance without breaking the bank. The results are satisfying. The past week has been dedicated to testing the RTX 4090 Founders Edition in both synthetic benchmarks and actual gameplay.

The RTX 4090 itself is the primary focus of this article. Similarly sized to the preceding 3090 Ti, this graphics card is enormous. It’s a little over five and a half pounds for a three-slot graphics card. But it’s a huge, gorgeous card in the same silver and black color scheme that debuted on Nvidia’s 30-series cards two years ago.

There are some very large leaps there. However, it has been shown time and time again that increasing the number of cores or shaders does not necessarily result in a corresponding increase in performance in games. Nvidia, however, has delivered here, and the considerable improvement I’ve observed across the board of my tests indicates that this is no mere incremental update. We’ve just taken a giant step forward in time.

The 24GB of GDDR6X video RAM is obviously intended for 4K gaming dominance, but it should also be quite appealing to creators and professionals. It’s unnecessary for all but the most resource-intensive games of today, but it can significantly reduce the processing time required to generate 3D models. Because it can make more frequent use of the card’s faster frame buffer, OctaneRenderer’s rendering speed is greatly enhanced by the presence of 24GB of system memory. When rendering with Blender, you can keep working in the viewport as the process runs in the background.

The experience of using these programs has also been vastly enhanced. Because the GPU has its own AI processors, denoising renders can be done considerably more quickly. However, DLSS 3 compatibility is likely the most exciting development for game developers using Unity, Unreal Engine, or Nvidia Omniverse. The same advantage enjoyed by games is also present here: ray-traced renderings in real-time at a fraction of the performance cost. According to Nvidia, it can render up to four times quicker than the RTX 3090 Ti.

To this day, the best option for a professional 3D artist is a workstation with a specialized graphics processing unit. Just as RTX cards are tailored to the needs of gamers, Nvidia’s workstation cards are tailored to the needs of artists and animators. However, these enhancements come with substantial cost increases. The RTX 4090 is a great compromise that will save you thousands of dollars compared to its workstation equivalent, making it a good choice for freelancers and those working on their own small businesses from home.

The addition of AV1 encoding is another key improvement of this generation. You can achieve higher-quality video rendering and stream with less bandwidth by using the AV1 compression codec. The RTX 30-series cards could decode AV1, but having a compatible encoder is much more important for the making of content. Thanks to its remarkable efficiency, you may boost the quality of your live stream video without using more data. To that purpose, DaVinci Resolves can reduce video rendering times by up to half.

However, Nvidia has also improved its cooler design, which is important considering that with greater power comes greater heat. Things appear to be the same on the surface. The dual-axial layout is reminiscent of the previous generation’s massive heatsink. For the back fan to exhaust hot air directly upward and out of the case, this is the ideal setup.

With the goal of improving cooling while reducing noise, Nvidia has upgraded to larger, fluid-bearing fans this time around. Likewise, the distance between the fins has been fine-tuned to boost airflow by as much as 15%. When this look appeared on the 30-series, we were rather taken with it. It was effective then, and it is effective now. The 4090 reached a maximum temperature of 64.7 degrees Celsius during our tests, which is excellent for a card of this caliber while using a factory-installed cooler.

The 4090 didn’t simply show up in our simulated benchmarks; it smashed through them like the Kool-Aid Man on speed. The 4090 scored a staggering 21,872 on the demanding 3DMark Fire Strike Ultra benchmark. To put that in perspective, it is roughly on par with the previous overclocking world record for Fire Strike Ultra for not just one, but two GPUs at the same time, and it is roughly 50 percent higher than the RX 6950 XT’s score of 14,512, which is the best that we’ve recorded in the house up to this point.

As expected, the trend holds true in the ray tracing synthetics, where the 4090 nearly doubles and in some cases actually doubles the scores of the 3090 Ti. Indeed, these are staggeringly large figures.

The 4090 also performs exceptionally well in our gaming benchmarks. Borderlands 3, Gears Tactics, Metro Exodus, and Total War: Three Kingdoms make up our typical four-game testing suite. Every test is done on the best possible graphics setting, with DLSS and ray tracing on if they are there.

For both in-game and synthetic benchmarks, the 4090 easily outperforms every other card we’ve tested at every resolution and frame rate. Naturally, it should. Since this is the flagship card of a new generation, only the 3090 Ti, a half-step upgrade from the 4090’s predecessor, stands a chance of competing with it.

How much of a head start does the 4090 have, exactly? When comparing the 4090 and the 3090 Ti in terms of performance in 4K, the former has a significant advantage. This advantage can range from 14% in Metro Exodus to 90% in Shadow of the Tomb Raider. That’s a frame rate of 100 FPS or more, and keep in mind that this is at 4K, maximum settings, and with ray tracing activated. I’ll say it again: those are staggeringly high totals.

Nvidia’s dedication to enhancing Deep Learning Super Sampling (DLSS) is likely responsible for at least some of the 4090’s success. That’s the artificial intelligence-enabled technology that allows games to render at a reduced resolution, in this example 1440p, and still, output 4K with near-native 4K visual quality. There were fidelity issues with early versions of DLSS because of the AI upsampling trickery, but with today’s technology, games appear just as beautiful (if not better) while utilizing DLSS as they do when without.

The latest version, DLSS 3, adds a new capability that essentially generates frames by itself, although it’s only available on the 40-series cards. The GPU compares two consecutive frames, computes the differences between them, and then utilizes its artificial intelligence prowess to construct a frame that falls somewhere in the middle. A more detailed explanation can be found on Nvidia’s site if you’re interested.

In comparison to the previous generation, this is a huge improvement that has the potential to completely revolutionize frame rate performance. While DirectX® Next Generation SuperSamplingTM 2 (DLSS 2) used motion vector data and individual frames to intelligently upscale images and improve performance, the RTX 4090’s optical flow accelerator independently determines motion paths and creates new frames outside of the native frames of the game engine. As a result of its cooperation with Nvidia Reflex, any lag in the gameplay is eliminated. According to Nvidia’s numbers, using DLSS 3 can result in up to four times the frame rate.

I found a noticeable improvement when utilizing DLSS compared to not using it, and an even more pronounced improvement while using frame generation in Cyberpunk 2077 at 4K resolution and top settings, including ray tracing. The 4090 averaged 41.9 frames per second in the benchmark’s in-game minute test when DLSS was turned off. The score increased to 84 fps when DLSS was activated without frame generation. Even with the extra processing load of frame creation turned on, the game runs at an astounding 136 frames per second while still appearing stunning.

It’s worth noting that there is a trade-off to frame generation in the form of a very modest increase in latency caused by the GPU’s need to generate and insert new frames into the stream. Keep in mind that this is the GPU making a frame outside of the game itself. DLSS 3 by itself has the potential to fake 120 frames per second while only feeling like 60. Have no fear though, as Nvidia Reflex more than makes up for this lag. In the small amount of Cyberpunk I played with frame generation enabled, the extra delay was not noticeable. However, this may not be the case in other games, and it may be especially problematic in fast-twitch esports games where every millisecond matters. Cyberpunk is a visually demanding game, thus the fact that it can be played at 4K with ray tracing at framerates above 120 is noteworthy.

It’s also important to note that Nvidia’s recommended system requirements for the RTX 4090 are very high. Nvidia recommends using a modern processor and DDR5 RAM to get the most out of your GPU. In addition to v-sync incompatibility, it calls for DirectX 12 and hardware-accelerated GPU scheduling (G-Sync is fine). Based on our lab setup, it’s clear that the minimum system requirements are more of a guideline, so even if you haven’t changed your computer in a while, you may still reap the benefits.

Finally, the issue of cost must be considered. Nvidia’s previous generation’s 3080, 2080, and 1080 were, in my opinion, the mainstream cards, and each new generation of graphics cards usually debuts with the upper end of those cards. However, the 4090 is the pioneer of the new generation, so I have nothing to compare it to but the older models. We also know the 4080’s pricing: $1,199 for the 16GB model and $899 for the 12GB model. However, until we get our hands on these cards, we have no idea how they’ll perform.

The 4090 is the new generation’s enthusiast-level card, thus it stands to reason that it will be supreme. Is it, however, worth the price? We won’t know for sure till later.

Even when compared to the 3090 Ti, which arrived this year at a retail price of $2,000 and has subsequently witnessed price drops to as low as $1,100 on sale, its figures are astounding. As I mentioned before, the 4090 outperforms the 3090 Ti by at least 15 and possibly as much as 90 percent in 4K. In light of such facts, a 45% premium above the previous market leader is actually rather reasonable.