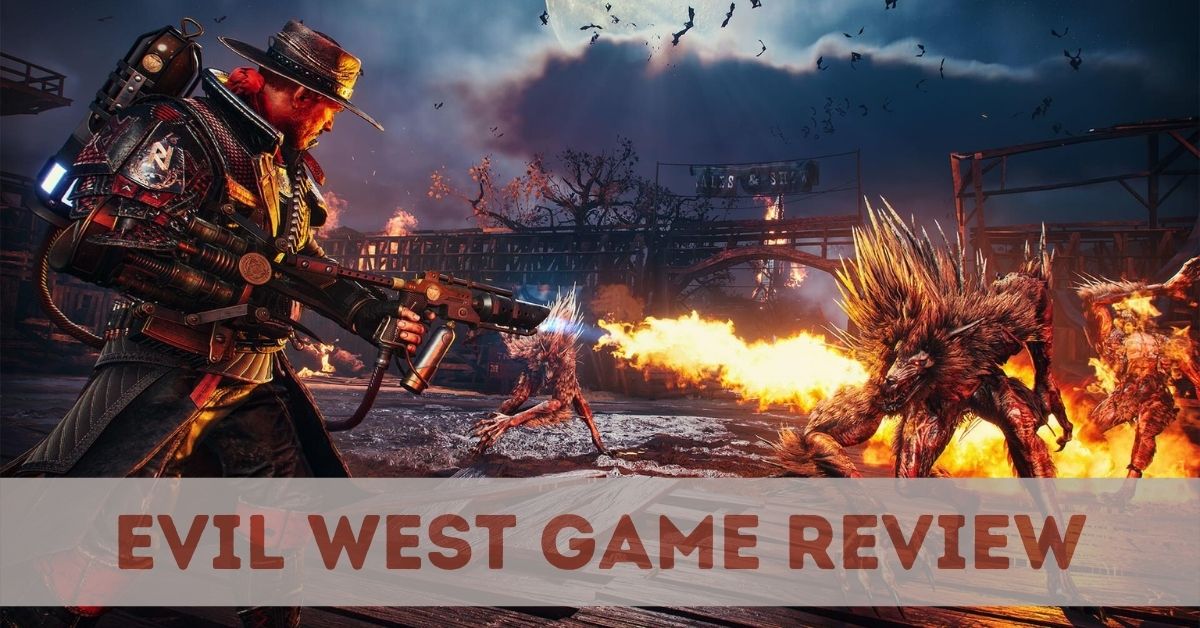 Evil West Game Review: In Evil West, we follow Jesse Rentier, a member of a secret hunting group, as he travels over the American frontier in search of and destroys nightmarish undead creatures. The scenario is immediately one of the most intriguing and fresh in recent memory.

The genres of horror and the western complement one another, and the twisted takes on traditional western settings are a lot of fun. There is a wide variety of interesting and unusual places to go, from a wild west town ruled by vampire familiars that gather blood for their masters to an inverted pyramid that acts as a blood temple where the floors run red with it.

The game’s mechanics are clearly inspired by God of War, and why not? Also, during fights and expeditions, players take control of Jesse from a close third-person perspective. The player can equip a wide range of weapons and tools, from a large iron gauntlet that provides melee damage to rifles that can shock or attack enemy weak places.

Jesse’s armament expands as players gain experience, and he quickly becomes a vampire’s worst nightmare as he weaves through the shadows and annihilates the undead. There are also advanced manoeuvres like parrying and firing off bullets from Jesse’s rifle when an opponent reveals a vulnerability.

“Evil West is an effective and exaggerated action-adventure game that a lot of us have been waiting for.”

As in-depth as you’d like it to be, the battles can go. It’s a wonderful experience overall. Whenever they aren’t fighting, players can explore the area, and they’ll find plenty of backstory along the way that helps to make this nightmare of a place feel more real.

There are some of the most fascinating backstories I’ve read in a long time in Evil West and I was fascinated with tracking down all my treasures so I could learn as much as I could about Jesse and his world. It’s a fast-paced narrative.

During the first few hours, you’ll travel between different areas and take on different foes, with each chapter ending with a memorable boss fight. Nobody will complain that Evil West is boring. Even better is that I was able to complete most of the game in around 14 hours.

i’ve been playing evil west this week and it’s good!! it plays like someone sat down and looked at van helsing, vampire hunter d, from dusk till dawn, and darkwatch and went ‘yes that’https://t.co/73G3CZHur9

So Evil West doesn’t drag on for too long. Some may complain about the game’s length, but I believe character action games succeed because players enjoy the gameplay so much that they return to experience it on higher difficulties.

Because I know I barely made it through some of the confrontations in Evil West on normal difficulty, I can’t wait to give it another go on higher difficulties. The fact that Evil West can be played entirely in co-op sets it apart from God of War, providing players with the chance to work together with a friend to kill as many vampires as they can handle.

I wasn’t able to try this out myself, but it’s good to know it’s an option for those who are. However, the performance is subpar. My upbringing taught me that in order to provide the smoothest and most responsive experience possible, character action games require a frame rate of 60 FPS or higher.

“Evil West deserves a spot among the best games that take place in the wild west.” https://t.co/xgY8LZ8KxD

All systems, besides the Xbox and PlayStation 4, can only handle Evil West at 30 frames per second. The resolution is limited to 1080p when played at 60 frames per second on those systems, which is frustrating for a number of reasons.

Only time will tell if the developer is able to tackle those performance issues and give players a top-notch service. Evil West is reminiscent of classic video games in many respects. The emphasis is on delivering an engaging story in a fantastic environment with excellent gameplay.

Evil never sleeps… but it bleeds.🩸

A dark menace consumes the Old West. You’re a vampire hunter, the final line between humanity and the terror that emerges from the shadows.#EvilWest is now available on PS5, PS4, Xbox Series X|S, Xbox One & PC: https://t.co/u8fCeWRRwN pic.twitter.com/1R31tUcU3E

Neither microtransactions, live-service features, nor a janky experience hampers the game. Even in a year full of excellent horror games, I really hope that Evil West doesn’t get overlooked because at its core it’s a fantastic horror-action game.

Followers of the horror genre, fans of the western genre, and fans of video games, in general, would all like this game. A sequel would satisfy my appetite, which is a positive indication.

Will Evil West be on the Xbox game pass?

Game Pass does not include the Evil West DLC. Therefore, you can only play the game if you purchase it from the Microsoft Store and use it on a Windows PC or an Xbox.

How many hours is Evil West?

According to developer Flying Wild Hog in an interview with Xbox Dynasty, a typical playthrough of Evil West will take between 10 and 15 hours to complete.

Does Evil West have Crossplay?

Unfortunately, we have confirmed that Evil West does not support crossplay.

How long does it take to beat Evil West?

On average, players can expect to spend between 10 and 15 hours on their first playthrough. The total time commitment required of players can vary depending on the game mode they choose.

Please keep visiting Techballad.com for updates. Keep our site bookmarked so you can easily return to check for new content Like iQOO 11 Leaks and Xiaomi 12T Pro