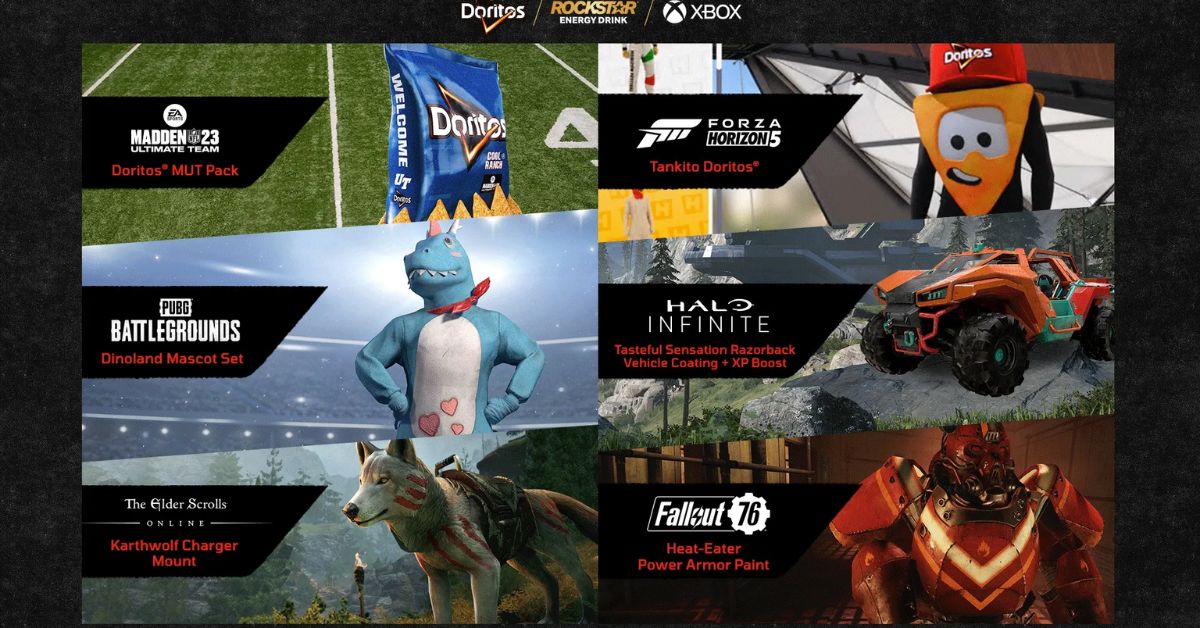 Fans of both Xbox and food should celebrate, as the company has announced a new offer in collaboration with Doritos and Rockstar Energy Drink. Earlier this week, it was reported that Xbox and Doritos will be working together again; today’s statement confirms this and adds that they will also be working together with Rockstar Energy Drink to bring fans of all three brands more than just a new supply of game-themed food and drink.

Xbox has announced that fans can win prizes as part of this promotion, alongside the reveal of special edition packaging showcasing iconic properties like Halo, The Elder Scrolls, and PUBG. To participate for a chance to win one of “over 10,000 gaming-themed prizes,” consumers need only buy one of the specially marked Doritos bags or Rockstar cans and enter the code provided on the packaging.

A lucky winner can choose from a wide variety of prizes, including custom-built computers, Xbox Series S consoles, a selection of gaming and streaming accessories, and an entire month of Xbox Game Pass Ultimate for free.

In-game products inspired by the “bold taste” and “totally charged flavor” of Doritos and Rockstar Energy Drink will also be made available to participants, and new subscribers to Xbox Game Pass Ultimate will receive a free month of the service. DLC for games like Fallout 76, Forza Horizon 5, Halo Infinite, PlayerUnknown’s Battlegrounds, The Elder Scrolls Online, and Madden NFL 23 can be unlocked with a code.

Except for the Madden NFL 23 Ultimate Team pack, which can only be obtained by purchasing the limited-edition Doritos in the United States, these will be made available to all players. Players have from today, October 3rd, until December 30th, 2018 to take part in Xbox’s partnership with Rockstar Energy Drink and Doritos.

Exclusive Rockstar cans will be sold in Belgium, the Czech Republic, France, Ireland, Poland, Slovakia, and the United Kingdom, while limited-edition Doritos bags will be sold in Australia, Belgium, Denmark, Finland, the Netherlands, Norway, and Sweden. Even while there won’t be any cans available for purchase in Canada, Denmark, Germany, the Netherlands, Portugal, or Spain, fans in those countries can still enter the Xbox sweepstakes for a chance to win prizes.

About Doritos and Rockstar Energy Drink