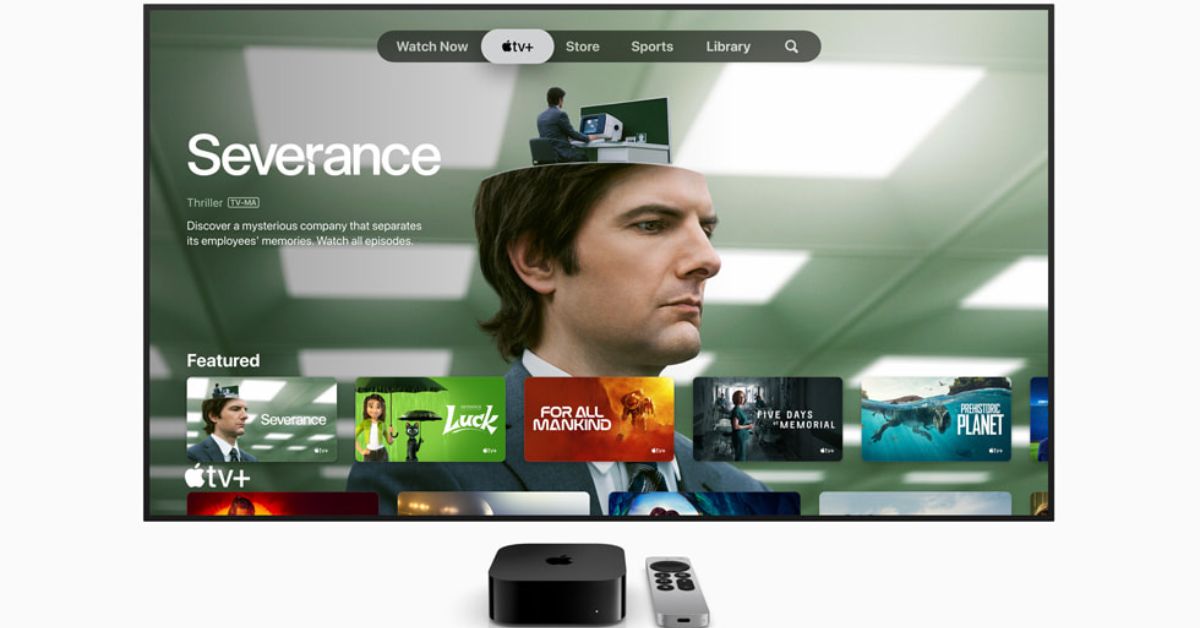 The A15 Bionic chip, HDR10+ support, and the new lower starting price make the newest Apple TV the most powerful one ever. The next iteration of Apple TV 4K was just revealed, and it’s more powerful, engaging, and inexpensive than ever before, all while providing incredible cinematic quality. The new Apple TV 4K, propelled by the A15 Bionic CPU, provides faster speed and more fluid gameplay and is packed with content that anybody in the family can enjoy on the largest screen in the house.

Apple TV 4K now supports HDR10+ in addition to Dolby Vision, allowing customers to enjoy their favorite movies and TV series in stunning 4K resolution on even more televisions. 1 Apple TV 4K streamlines the process of finding and watching content consumers love by running tvOS, the most advanced and user-friendly operating system for the living room, and including the best-selling Siri Remote.

With its ability to work in tandem with other Apple products, this hub can perform several useful functions for the household as a whole, including bringing a touch of enchantment to the living room in various ways.

According to Apple’s VP of Worldwide Product Marketing Bob Borchers, “Apple TV 4K is the ultimate way for Apple consumers to enjoy their favorite entertainment on the biggest screen in the home,” and it’s more powerful than ever. The new Apple TV 4K stands apart from the competition because of its superior picture quality, simple interface, and access to a wide variety of high-quality content created by Apple. Everyone in the household is sure to find something they enjoy.

Apple also announced a new Apple TV with the A15 Bionic chip and HDR10+ for $129https://t.co/mWbcgyQGM1

The next-generation Apple TV 4K is an entertainment powerhouse, delivering cutting-edge video and audio to the largest screen in the home. The new Apple TV 4K’s A15 Bionic processor is the device’s brains, and it’s more powerful and efficient than ever. The next generation’s CPUs are up to 50 percent more powerful than their predecessors, resulting in improved responsiveness, speedier navigation, and smoother UI animations. For even more fluid gameplay, the new GPU generation is up to 30 percent faster than the old one.

With the inclusion of HDR10+ support, Apple TV 4K is now compatible with a wider range of televisions than ever before, allowing viewers to see content in the stunning 4K resolution and vivid colors and textures that their favorite creators intended. Dolby Digital 7.1, 5.1, and Atmos surround sound are all available to users for a real theatre experience in the comfort of their own homes. 2

Users may experience Apple TV’s simple. An attractive user interface with the help of the Siri Remote’s touch-enabled clickpad allows for speed, fluidity, and accurate control.

3 Using the Apple TV app, viewers can watch Apple TV+’s award-winning original series and films, shop for over 100,000 movies and TV shows to own or rent and sign up for premium accounts with their favorite streaming services with a single click.

Seamless Integration with the Apple Ecosystem

The 4K Apple TV is simple to set up with an iPhone and can be controlled at any time with the included Apple Remote or via Control Center. Apple TV 4K’s native support for the full suite of Apple’s products and services enables a one-of-a-kind entertainment environment, bringing the best of the Apple ecosystem into the living room. 4

This fall, with the release of tvOS 16, Apple will be enhancing the Apple TV experience with new features. One of these is an updated version of Siri that will make it simpler for users to command Apple TV with their voices.

5 Siri has been reimagined for Apple TV, and now it will be able to identify each user’s voice and resume where the user left off with their favorite shows, movies, music, games, and apps. Asking Siri “What should I watch?” using the Siri Remote will yield personalized suggestions.

AirPod owners may operate Apple TV with a simple voice command, saying “Hey Siri,” and then enjoying their hands-free search results. By the end of the year, Siri for Apple TV will be available in 30 countries and regions thanks to the addition of Chile, Finland, and South Africa.

Everyone in the family can sit around the TV and look at everyone else’s images thanks to iCloud Shared Photo Library on Apple TV. Apple TV 4K’s cross-device connectivity will let programmers create apps for the Apple TV that link with the iPhone and Apple Watch to provide users with a more individualized viewing experience.
To continue enjoying SharePlay, users can begin a FaceTime session on their iPhone or iPad while simultaneously viewing a TV show or movie on their Apple TV. This will allow users to stay synchronized, ensuring that everyone simultaneously sees the big revelation or gets the joke. Play, pause, and skip forward are all options for anyone participating in a SharePlay session, whether they’re using their own Siri Remote or not.

An Apple TV user monitoring a HomeKit camera can activate surrounding devices, such as the outside lights, or view footage from numerous cameras at once. More than that, HomeKit Secure Video employs the in-built intelligence of Apple TV 4K to conduct a covert analysis of the video to identify people, animals, cars, and package delivery. 6

Apple TV 4K and the Environment

The new Apple TV 4K uses roughly 30 percent less power than its predecessor to reduce its environmental effect while providing much-improved performance. 7 Thanks to its increased efficiency, the A15 Bionic doesn’t require an internal fan, making it smaller than its predecessor and reducing its carbon footprint by 25%.

Apple TV 4K is the first Apple TV to use recycled gold for the plating of several printed circuit boards; the solder used in the device is also made entirely from recycled materials. Both the heat module and the Siri Remote case are constructed from aluminum that has been recycled. By eliminating the plastic outer wrap and increasing the percentage of fiber-based materials, Apple is one step closer to its goal of eliminating plastic from all its packaging by 2025. No mercury, BFRs, PVC, or beryllium is present in any Apple TV 4K model.

Apple has already achieved carbon neutrality for its worldwide corporate operations and aims to achieve the same goal for its manufacturing supply chains and product life cycles by 2030. As a result, the whole life cycle of an Apple product, from raw materials extraction to final product recycling, will have zero environmental impact.